I had the opportunity to take part in the Ludum Dare game jam #34 in which teams taking part are supposed to create a game in 48h on a given theme. My brother Louis was already presenting a game on his own but we decided to join our efforts on a second game because why not 🙂

To spice things up, we switched our usual roles:

The game is a compilation of mini-games to grow a glorious beard following the precepts of your beard coach Handsome Dave! (Themes were “Growing” or “Two Button Controls”)

Game is playable in HTML5: 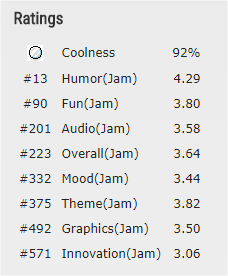 LD 34 entry rating, quite happy with that!

We got great feedback though we finished a little late:

We were quite satisfied  with that because of the limited resources we had and the little time we spent.

Special thanks to Benjamin who contributed the original music!