Update 2015-08-15: This article describes how to add resistors to the fans to reduce the fans’ speed. It’s a great alternative especially if you have difficulties finding compatible fans.

We got a couple of Dell PE 2950 for a test environment, they work great and are really cheap in China. The only downside is the Power Consumption which can be a problem for long term use.

Well, I was satisfied of my test environment except that my desk was located near the server bay and that the noise was unbearable for a prolongation period of time. A workmate measured the noise of the Dell PowerEdge 2950 to be around 70 dB. As loud as a busy street traffic!

Brent Ozar’s article on silencing a Dell PE 1900 motivated us to replace the fans.

At the time I did it, not so many articles were available on the web about silencing the 2950.

There are risks in modifying your vendor products.

Flashing your firmware could make your hardware unusable

I hold no responsibility for any damage you could do to your equipment!

SUNON PMD1206PMB3-A used to silence a Dell PE 2950. That’s the amount of dust you get in 1 year in Beijing without filters to your server room!

After a little research, our choice went for this fan: SUNON PMD1206PMB3-A

It’s very important that the new fans have 4 wires (PWM feature). If the BMC is not able to able to read the speed and modulate the power, it will report errors.

If the specs may appear well bellow the original fans but keep in mind that most of the time fans are not blowing full speed!
In case you didn’t open you Dell 2950 yet, there is 4 fans to replace! 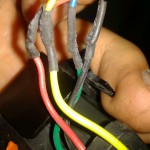 The plug needs to be changed and the wires remapped.

The plug for of the original Dell fan is specific to Dell so we need to cut off the plug of both new and old fans and solder the Dell plug onto the new fans.
The mapping of the wires goes like this:

You really don’t want to take any chance to have a shortcut in your server.

Note that obviously, you also need to move the orange fan casing from the original to the new fans.

The BMC has speed warning and failure thresholds. Replacing our fans by slower silent fans means that the thresholds will be triggered frequently. Generating alerts and blowing the fans full speed.

The solution is to modify the BMC to lower the threshold for it now to generate alerts.

Apparently not all 2950 need to have their BMC firmware replaced

Both the version II had to have their firmware replaced but not the version III.
You may want to try your new fans and see if the fan speed alerts are triggered in the BMC.

The process to change the firmware is detailed in this blog article.

In case that blog goes down, the process goes likes this:

You now should have a silent server!

Step4: Make sure everything is running smoothly

Check your machine status using your DRAC or OpenManage:

If you don’t have alerts configured… Well, you should!

Modifying the cooling should be an extra reason for you to configure SMTP, SMS or SNMP with your DRAC or OpenManage. Seriously, do it now.

Thanks to them for their great blogging!